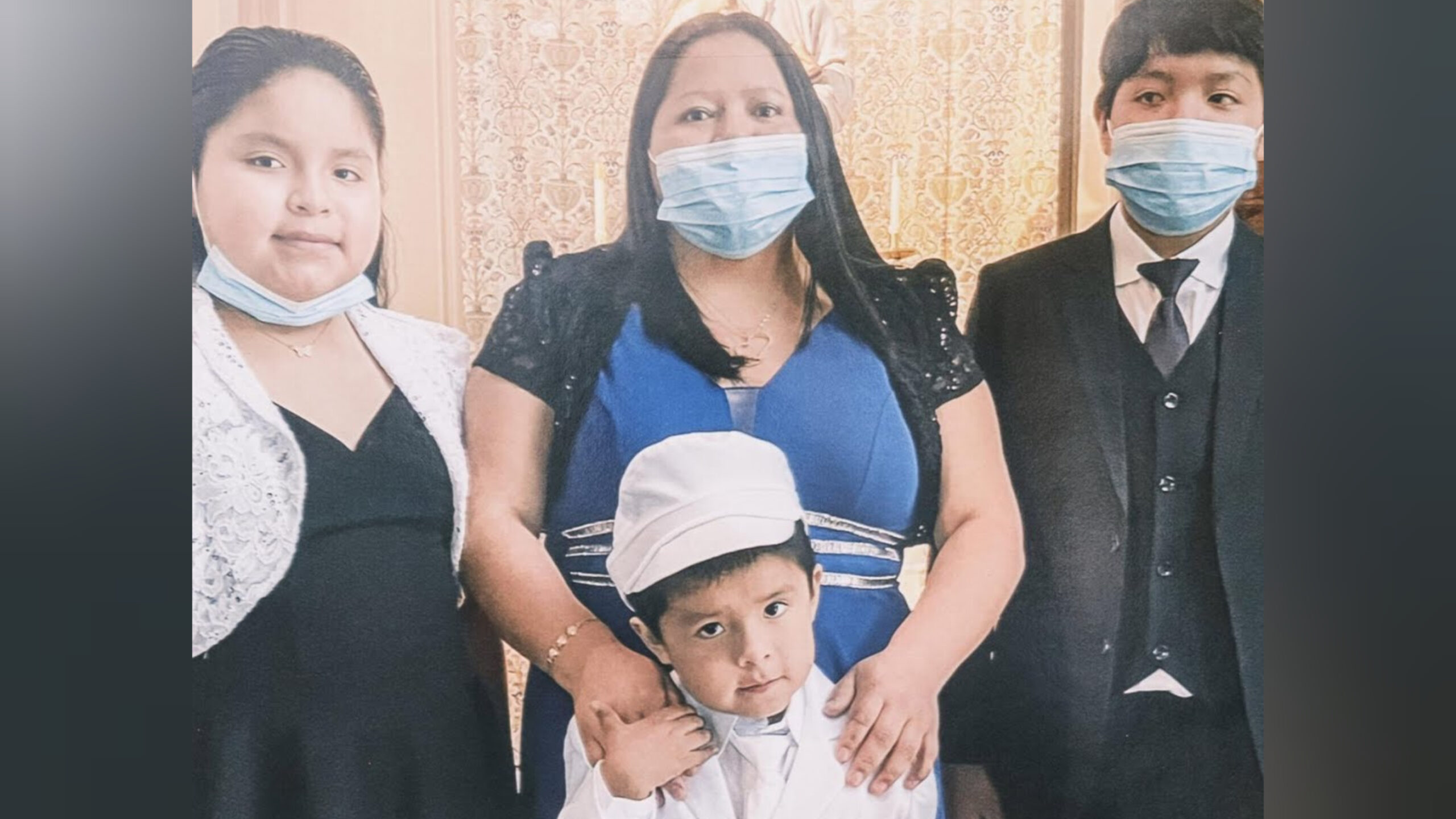 The Connecticut mom who strangled her three children before hanging herself left a suicide note for her husband that read, “Sorry, Pedro, I take my kids with me,” his cousin said on Friday.

36-year-old Sonia Loja had long battled depression and had been crying for days over the shuttering of her illegal child-care business before Wednesday’s horrific murder-suicide in Danbury, said relative Digna Naulaguari.

Loja’s devastated husband, Pedro Panjon, saw no signs of the coming violence and only realized that something might be amiss when he got home from work that day — and none of the kids ran out as usual to greet him, the kin said.

“I feel terrible,” an exhausted Panjon told The Post on Friday, briefly speaking through an interpreter outside the family’s Whaley Street home, where mourners had left a makeshift memorial of photos, candles and balloons.

“There was nothing wrong with how Sonia was acting” before the tragedy, he added.

But Panjon realized something was off as soon as he arrived at the front door that evening, his cousin said.

“When Pedro came home from work, the kids would always rush out to his car and yell, ‘Daddy! Yay! My daddy came back!,’ especially the girl, Joselyn,” Naulaguari said.

“They would help him bring his things in, like his lunchbox and everything. On Wednesday, he came home, and the door was locked, but the door was never locked. When the kids didn’t come out … that’s when his heart broke” because he sensed something must be seriously wrong, the relative said.

Panjon, who works as a landscaper and carpenter, rushed inside to the kitchen, put down his lunchbox and spotted the two-page suicide note, his cousin explained.

“The letter said, ‘Sorry Pedro, I take my kids with me,’ ” Naulaguari said.

“He didn’t read nothing more, he pushed the letter away. He still hasn’t read it.”

Panjon then ran to a bedroom, where he found his 12-year-old son, Junior Panjon, on the floor and 10-year-old daughter, Joselyn Panjon, on the bed — both with cords, possibly electrical cables, around their necks, the cousin explained.

“He took the cables off, hoping he’d hear life, but it was too late,” she said.

The youngest boy, 5-year-old Jonael Panjon, was in another room, also with a cord wrapped around his neck, the cousin said.

The distraught dad called the police when he couldn’t find his wife, but a dispatcher was having a difficult time understanding him, so he went out to the yard to ask for a neighbor’s help and collapsed to the ground and was later taken to a hospital, his cousin said.

Responding officers found Loja hanging in the backyard shed — near a swing set and toys that had been used by the children in her illegal day-care operation.

Loja suffered from depression, which had gone untreated because she had no health insurance and it was “too expensive to go to the doctor,” Naulaguari said.

Her recent troubles over her illicit business, which was twice cited by the state last month, only exacerbated her mental condition, the cousin said.

“Her job was baby-sitting, but the city closed her business down, they said it was illegal. She was not working,” Naulaguari said. “Then she was crying, she was so sad. She would say, ‘I need to work,’ but she had three kids, so she wanted to work from home. She wanted to stay and take care of her kids and the other kids.”

The state Office of Early Childhood cited Loja for operating the illegal day-care center in her home twice last month, a rep told The Post. An anonymous tip led officials to the house June 2, when Loja was cited the first time, representative Maggie Adair said. A follow-up visit four days later found children in the home again — but Loja claimed they were family members, Adair said.

The agency followed up June 29 and found the illegal day-care still operating, slapping Loja with a “Demand to Cease” letter, according to the office. A visit a day later found no children in Loja’s care, Adair said.

On Monday, Loja called her sister in Westchester County to tell her she hadn’t slept in days because she was “under a lot of stress,” Naulaguari said. Loja’s sister promised to visit this weekend for a barbecue with other family members, the relative said.

“Two days later, and she was no more,” Naulaguari said.