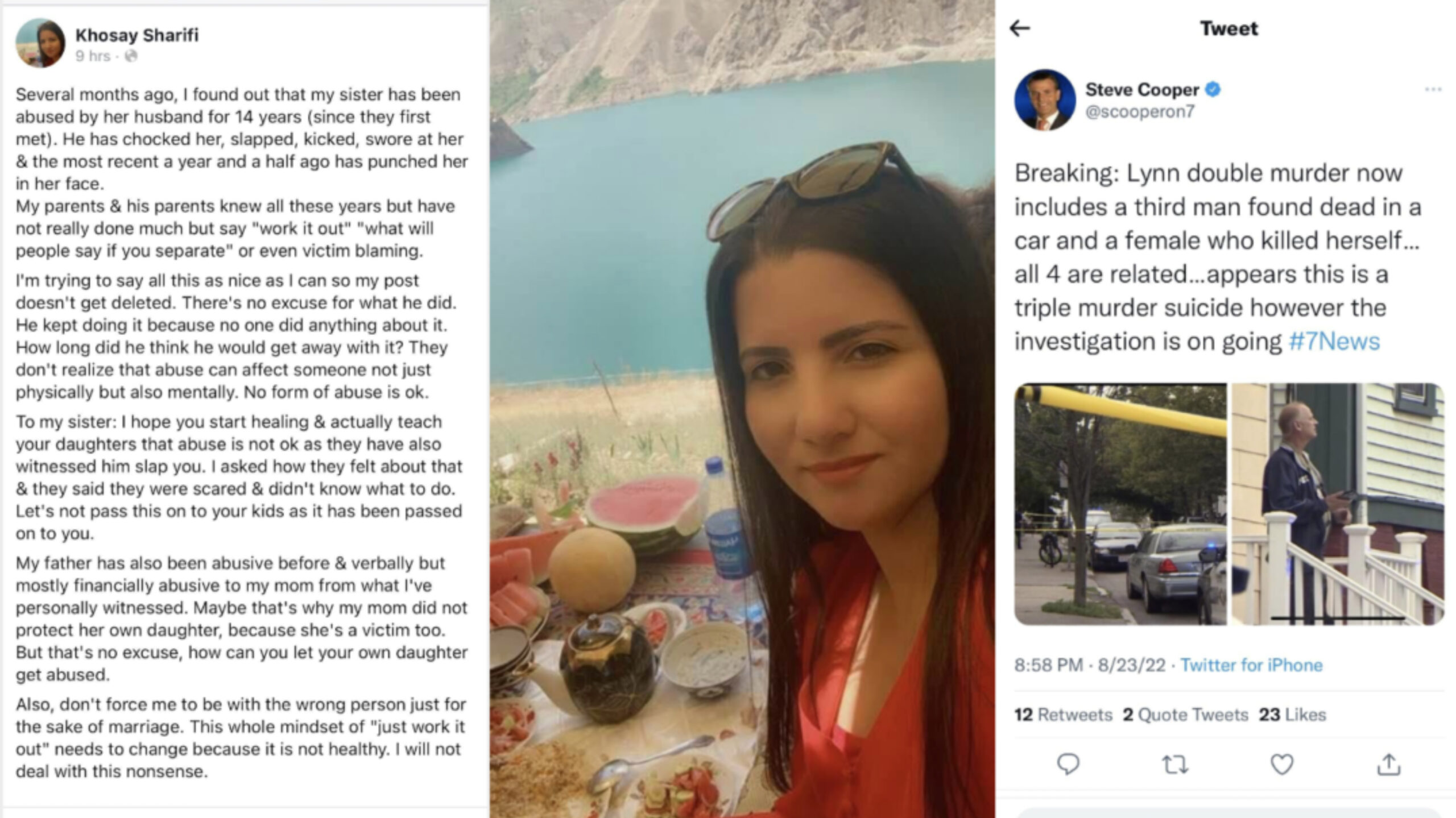 A Massachusetts woman who allegedly killed three male family members and then herself had posted a chilling Facebook message before her suicide. She accused the men she targeted of domestic abuse and vowing to “not deal with this nonsense.”

31-year-old Khosay Sharifi allegedly killed her father, brother-in-law and his dad on Tuesday in Lynn, Massachusetts, before shooting herself in a Stop & Shop parking lot.

“Several months ago, I found out that my sister has been abused by her husband for 14 years (since they first met),” she wrote on Facebook just 10 minutes after neighbors of the brother-in-law reported hearing gunshots.

“He has chocked [sic] her, slapped, kicked, swore at her & the most recent a year and half ago has punched her in the face.”

Sharifi, an optician, then accused her brother-in-law’s dad and her own father — both of whom she allegedly killed — of being complicit in her sister’s abuse.

“My parents & his parents knew all these years but have not really done much but say ‘work it out’ ‘what will people say if you separate’ or even victim blaming,” she wrote.

Sharifi noted that she was using gentle language in her Facebook post so it wouldn’t be taken down by the social media company. The post was still up as of Thursday.

She also addressed her sister in the post directly, writing: “I hope you start healing & actually teach your daughters that abuse is not ok as they have also witnessed him slap you.

“I asked how they felt about that & they said they were scared & didn’t know what to do.”

Sharifi said her own father had been abusive to her mom, “verbally but mostly financially.”

“Maybe that’s why my mom did not protect her own daughter, because she’s a victim herself,” she wrote.

Sharifi did not hint at her alleged crimes in the post, or mention that she planned on taking her own life.

All she said was a cryptic: “I will not deal with this nonsense.”

Officers from the Lynn Police Department responded to a report of shots fired in a home just before 3 p.m. Tuesday and found two men, ages 34 and 66, dead from apparent gunshot wounds. They have since been identified as Sharifi’s father and brother-in-law.

Just before 4:30 p.m., cops found Sharifi dead inside her car in a Stop & Shop parking lot about a mile away.

They later discovered another person dead in his car — revealed to be the brother-in-law’s dad — nearby.